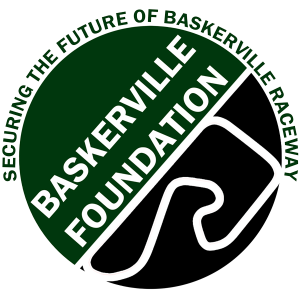 The Baskerville Foundation was established in June 2013 and since that time has benefited enormously from the generosity and enthusiasm of the Tasmanian motorsport community.

The founding Baskerville Foundation committee included Peter Killick (Chair), Garth Wigston, Becher Townshend, Dick Shoobridge and Shaun Lennard.  To date the Foundation has raised in excess of $1M which has been expended on significant and in some case, urgently needed essential infrastructure at Baskerville Raceway.

The Foundation acknowledges and is indebted to the various car clubs and individuals that have contributed to the organisation of the annual Baskerville Historics events since its inception in 2010. The annual Historics event has been the primary fundraiser for the Baskerville Foundation since 2014, and the prolific Baskerville refurbishments funded by the Foundation would not have happened without the significant funds raised from this popular annual race meeting.

The Foundation’s first major project was the $100,000 rebuilding of the dilapidated Control Tower building, which had been in situ since replacing the old trolley-bus-based control building in the early 1970s. That project involved a necessary total refurbishment inside and out and included an extended Kelly Room (general annexe), new Stewards Room, and new drainage, paths and paved area adjacent to the admin office.

This work commenced in late 2014 and was completed in time for the first State series round in late February 2015 – some $50k under budget, thanks to the significant volunteer labour and site management, and free, in-kind or discounted labour provided by local trades specialists.

Also in 2014, the circuit entry road into the track and pits was sealed with significant assistance from Andrew Walter Constructions and Roadways. A piece of internal road from near the control tower south past the clubrooms was also sealed to assist with dust minimisation.

Another old and dilapidated Baskerville structure – the former Longford street circuit pedestrian bridge donated to Baskerville in the late 1960s by the late Don Gorringe – was replaced in mid-2016 in time for the Historics meeting. The Hobart Sporting Car Club donated $75,000 to the project.  The labour force for the partial demolition and reconstruction was predominantly volunteer, with essential equipment and services provided gratis or significantly discounted.

But while the control tower and bridge projects were important and necessary, the big prize – the project that had always been top of mind for the Foundation since inception – was the total resealing of the 2.1 kilometre bitumen surface. The track surface had been in poor condition since being badly damaged in a truck race meeting in the early 2000s. It was significantly patched, had many different surfaces and had latent drainage problems that contributed to the deterioration.

A major earthworks and drainage program was undertaken in 2016 with considerable assistance from Andrew Walter Constructions. This was essential before the new track surface was laid in order for the new track to have some longevity.

Through the tireless efforts of many volunteers in dozens of fundraising events, in addition to the annual raffles, popular memorabilia auctions, film nights, bus tours and cash collection tins strategically placed – plus generous, large donations from track users and car clubs around the state, around $600,000 had been raised to that point.

In September 2016 the Foundation launched the Flying Finish campaign, a final push for donations of $5,000 each to ensure the track resurfacing proceeded in December 2016 as planned. Thanks to the magnificent generosity of the following donors this was achieved: Justin Rooke, John Pooley, Mac Russell, Chris Edwards, King Trailer Industries, Hobart Sporting Car Club Inc, Sports Riders Club and MG Car Club of Tasmania Inc​.

After the infrastructure developments to that time there was still a shortfall of some $100,000 in the track resurfacing budget. Thanks to a very generous quote from longtime Baskerville supporters The Roadways Group (founder, the late Ian Harrington was a former HSCC President) and a special loan arrangement, the resealing works commenced in December 2016 and were finished in time for the March State Round meeting in 2017. It was indeed a time for great celebration – and relief – as this strategic project assured the sustainability of this popular facility – the nation’s oldest continuously operated permanent circuit.

The subsequent modest profits from the Historics meetings in 2017/18 cancelled the remaining loan debts, so fundraising focussed on further improvements in and around the pit/paddock area.

In 2018 a new retaining wall at the northern end of the main pits was built with assistance from volunteers in working bees. This ensured the integrity of the earth bank and provided additional car space. And in late 2018, again in time for the Historics meeting, the modern “Wonder Wall’ at the bottom of the main pit area was constructed, featuring permanent historic interpretation signs for visitors to enjoy. This area also serves as a display area for promotions.

As always, this project would not have been possible with the budget available without great support. The Foundation thanks Bruce Walter and team for the stone wall; Graeme Soden and Neil Johnson; Tony Woolley from TKW welding for the steel frames; Dean Tapping and team from Webb Bros Paving; Island Block and Paving; Cordwell Excavations; Andrew Sherrif and Thomas from Deloraine Signs; Todd and Bernie Russell; Tas steel supplies; John Button HBV Architects.

In recent times the main pit catering area has been upgraded with new drainage, permanent catering infrastructure and safer pedestrian access and facilities.