Baskerville Raceway lays claim to being Australia’s oldest continuously operated permanent racing circuit, having had an unbroken run since being founded in 1958 just outside Hobart in Tasmania. Set in a natural amphitheatre, it has been the home of the island State’s club racing scene from its inception.

Since 2015 the track has been known as Pepsi Max Baskerville Raceway in deference to a naming rights deal with the soft drinks giants. 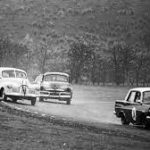 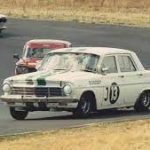 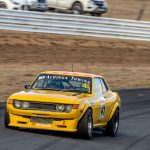 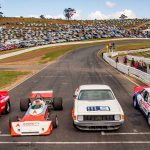 Interest in motor racing had been relatively well catered for in Tasmania in the post war years, with a series of club events held on temporary circuits at Valleyfield and Quorn Hall airfields. Then, from 1953, a new found international perspective was found when events began being organised at the Longford street circuit. The passion for the sport was now well established.

What the island lacked, however, was any form of permanent venue and so in 1954 the Hobart Sporting Car Club (HSCC) set itself the task of creating one. Some determined fundraising followed alongside a search for a suitable plot of land on which to create the circuit.

The efforts paid off when agreement was reached with Calvin Morrisby to build the new facility on a plot near Bridgewater, about 20km north of Hobart. In exchange for a peppercorn rent of one shilling per year, the HSCC was granted a one hundred year lease. In gratitude, the club named one of the corners at the new circuit ‘Calvins’ in his honour.

Development of the circuit followed during 1957, with the circuit ready for its inauguration in February 1958. An estimated 20,000 spectators (one of the biggest crowds seen at a sporting event in Tasmania at the time) turned out to watch as the Premier of Tasmania, Robert Cosgrove declared the circuit open for business.

The circuit could best be described as basic at this point; essentially it was just an asphalt road surrounding a grass paddock, with no real facilities for the crowds, save for an excellent view courtesy of the natural amphitheatre provided by the topography. There was no pit lane, with competitors driving along a dirt road from the final corner to the roped off paddock area.

This was essentially all the HSCC’s finances could stretch to at that point, although grand plans were spoken of one day extending the track when resources allowed; in the end, however, nothing came of these plans.

An exciting programme of races thrilled the onlookers, featuring sports cars, saloon cars and even motorcycles. One race saw a spectacular roll over by Fiat 1100 driver Alan Burrell, who walked away uninjured. Fastest lap was recorded by Don Gorringe in his Javelin Special, circulating in 1min 21.5 seconds. This was however bettered in one of the motorcycle races by Max Eaves on a Norton, who shaved another half a second off the record.

Overall the circuit was hit with competitors and spectators alike, despite the basic nature of the facilities. As the years went by, gradual improvements began to be seen, including the addition of a rather extraordinary stewards building formed out of an old bus which sat atop another wooden building, with a windowless vantage and commentary point perched above them all, accessed only by ladder…

The closure of the Longford circuit helped boost facilities further. The bridge that had spanned the straight next to the control tower had been fashioned by Hobart Sporting Car Club founding member, Donald Gorringe. Not wanting to see his handiwork go to waste, he partnered with fellow founding HSCC member Don Elliott to fund the relocation and installation to Baskerville Raceway. In return the bridge wore the Donald Gorringe name for many years.

Also making the move from Longford at this point were the wooden viewing platforms, which were erected at the edge of the paddock alongside the start finish straight, a short distance from the new bridge.

In the 1970s, circuit safety demands were rising, and armco barrier began being installed around the perimeter of the track. Baskerville was at least fortunate in having decent grassed run-off areas around much of the course, so the barriers had little impact on the visual appeal of the track. A rudimentary pit lane was also installed, accessed through a gap in the barriers, though this was still grassed over and had no other facilities for teams.

In the middle of 1975, further improvements saw the relocation of the Donald Gorringe Bridge, moved further towards the first corner and altered with its staircase from the paddock was turned through 90 degrees, allowing the pit lane to be greatly extended – even if its actual surface remained without its top asphalt seal for a while further still.

The pit entry was slightly unsatisfactory; essentially just a gap in the armco barriers that required drivers to slow to an almost dead stop. After a few years, this was amended, with entry now coming from the exit of the final corner. Even this was relatively short-lived, with the current much longer entry road created in 1986, which racers dive into shortly after the entry to the final corner.

In the early 1980s, Calvin Morrisby died and the land was sold to a consortium of local motorsport-minded businessmen. Under this new arrangement, the HSCC abandoned its peppercorn lease in return for a 25% share in the company which was formed to own the land and the raceway. After a few years the consortium decided to sell the property, with the HSCC then purchasing ownership outright with the aid of a large mortgage. With several years of dedicated fundraising this was able to be reduced from around $275,000 to $150,000.

The HSCC was able to expand the calibre of events hosted at the track by the mid 1980s. While it has never sought top level touring car racing, it has hosted some other events of national prominence, including a couple of Truck Grands Prix and national sports sedan challenges, though the trucks probably did little to improve the ageing track surface.

Two wheeled events began being promoted by the Side Car Racing Club of Tasmania (SRCT) from the 1970s onwards and provided some of the highest level categories seen at Baskerville. In 1979 the SRCT held a major event under the name of the Tasmanian Grand Prix. Later the SRCT hosted its first round of the Australian Road Racing Championship (ARRC) in 1984, with the championships returning frequently until 1999.

However, the HSCC was, by contrast experiencing financial difficulty by the end of the ’90s, after it acquired the other permanent circuit in Tasmania, Symmons Plains, only to see its new acquisition lose its blue riband race for the V8 Supercars.

A new company Motorsports Tasmania Pty Ltd was formed which purchased the assets of the HSCC and commenced operation in October of 2000. MST has operated the circuit ever since, working to improve the presentation and maintenance levels of the property. It has also brought financial stability, with the last of the mortgage being paid off.

There was still trouble ahead though, at least for track users on two wheels. In 2003 Baskerville’s bike track license was pulled by Motorcycling Australia due to safety concerns about the distance between the track and the Armco railing. Under newly-elected club president Shaun Patmore, the SRCT committee with help from some dedicated members, organised a raft of working bees to address the issues. In 2004 Motorcycling Australia reinstated the track license.

Following a name change in 2009 the SRCT changed its name to the Sports Riders Club of Tasmania and, after 10 years without any racing, began organising ride/race days, allowing experienced members the chance to race, while maintaining the financial security to the club of ride days.

2011 saw the first major event hosted by the SRCT when it devised and organized the Tasmanian Historic Championships. The event was organized to coincide with the Australian Historic Championships round being held at Symmons Plains the preceding weekend, with participants coming from all over the country to compete in both solo and sidecar races crossing almost every historic period class existing.

Between 2009 and 2012 the racing continued to grow with the Tasmanian Motor Cycle Club (TMCC) also conducting regular race days and the number of participants growing slowly but consistently. In 2012 the SRCT and TMCC joined forces to return Interclub racing to Tasmania, with a three round championship consisting of one round at Baskerville and two at Symmons Plains. Standalone race days held at Baskerville by the SRCT also made their return.

The same year the HSCC launched the Baskerville Foundation, a fundraising initiative to bring the circuit to a more modern standard with the ultimate goal of a full resurface of the track. This project was boosted in 2015 when a deal was signed for Pepsi Max to become the naming rights sponsor, with the circuit changing its name to Pepsi Max Baskerville Raceway.

First to enjoy some investment was the historic bridge, which enjoyed a £75,000 renovation in June 2016. This was followed in 2017 when the full 2.01km circuit was treated to a complete resurfacing, at a cost of $600,000. Elsewhere, the track’s control tower also received a $100,000 makeover, with other works taking place around the circuit to improve electrics, drainage and access.

New for 2021 was the Race Tasmania event, which saw the Australian Racing Group bringing the popular TCR Australia, S5000 and Trans Am racers to Baskerville as part of a double-header with Symmons Plains to kick off the racing year. The Baskerville round on January 29-31 saw non-championship races or demonstration runs for the ARG racers, complemented by the Tasmanian State categories.